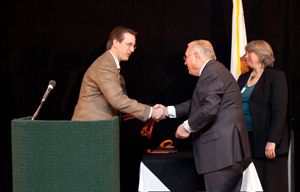 SAN RAFAEL - The San Rafael Chamber of Commerce and City of San Rafael hosted the annual State of the City dinner, board installation and awards ceremony on Friday, April 8, 2011. The event, otherwise known as "Taste of San Rafael," took place at the Embassy Suites Hotel, from 6:30 to 9:15 p.m. Nearly 300 attendees joined the event from around the region and enjoyed cuisine from 12 Chamber member restaurants and caterers.